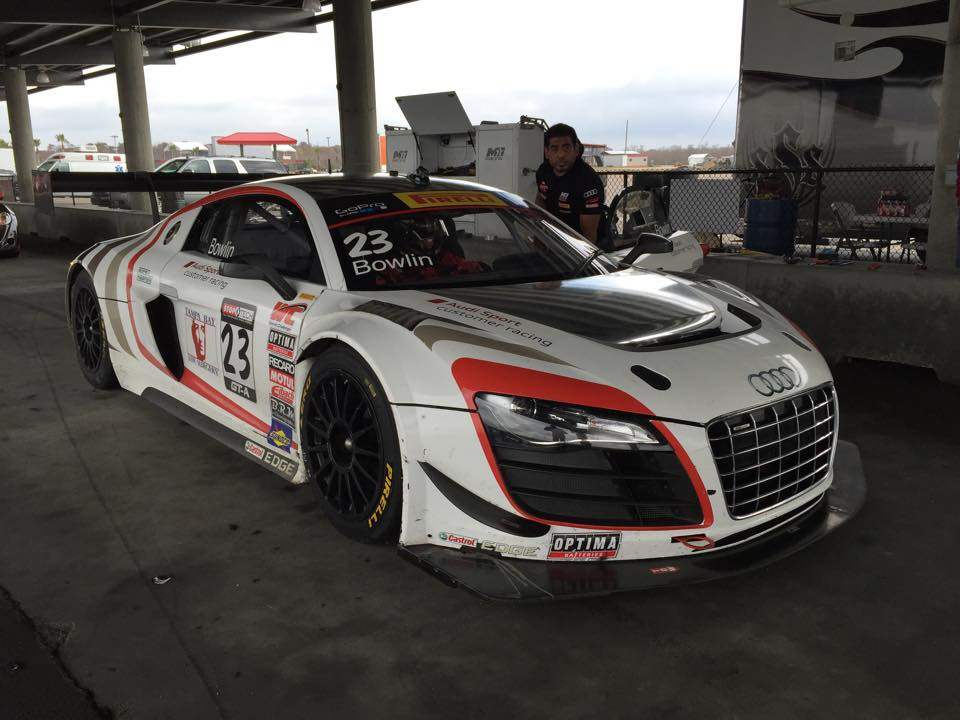 Austin, Texas (2 March 2015) - After starting his career in the open wheel ranks and then moving to sports car racing, Guy Cosmo has long been checking off a wide range of boxes on his career to-do list. And this weekend will see one more item marked off the list as Cosmo is set to make his Pirelli World Challenge debut. The versatile racer has been tabbed by M1 Racing (http://m1racing.co) to pilot the No. 23 Tampa Bay Jaw Surgery Audi R8 LMS ultra as World Challenge opens the 2015 season at the Circuit of the Americas this weekend. Cosmo’s first shot at sprint racing comes as car owner and driver Walt Bowlin is set for a select schedule of World Challenge races this year in the GTA class, with the COTA event not on that list. But with the stand-alone World Challenge season opening race weekend being staged just down the road from the M1 Racing headquarters in Dallas, the program came together for Cosmo to jump in and take the helm. “I’m really excited to make my World Challenge debut and to get the chance to race this Audi R8 LMS Ultra for M1 Racing. I want to thank Walt (Bowlin) and Tampa Bay Jaw Surgery for making this happen, as well as Paul Mata from M1,” said Cosmo. “I’ve been coaching Walt since late last year and though we were not planning on running COTA, we got to talking and everything came together at the last minute. I’m looking forward to this.” Tampa Bay Jaw Surgery is a leader in the treatment of conditions and diseases associated with the oral and maxillofacial complex. Founded by Dr. Walt Bowlin it has been providing quality surgical services state wide in Florida since 1999. New centers will be opening in Texas, Florida and other parts of the Southeast in the near future. The visit to the 3.4-mile circuit is not the first for Cosmo, who already knows the way to the podium at the Texas track, having scored a runner up finish in ALMS competition aboard a P2 entry. Cosmo has driven a range of GT machinery on the circuit including testing the Ferrari Challenge 458 platform at the picturesque road course. “I’ve worked with Paul (Mata) in the past and have driven the Audi a few times but will need to get more familiarized with it in short time," added Cosmo. "Fortunately I have experience at COTA so it should be pretty straightforward to put down the headset from coaching and put on the helmet to go race. I know a lot of the teams were down there last week to test so we might have a little bit of catch up to do but I’m ready and I know the team is as well.” Cosmo opened the year as reserve driver for the visitflorida.com line up at the Rolex 24, and the popular pilot is looking forward to his first taste of World Challenge action this weekend. “Pirelli World Challenge has seen incredible growth in the past few years and this season in particular will be extremely competitive,” said Cosmo. “The sprint format will be a welcome change for me where I can focus on myself and the car without the compromise of a teammate, and to do all this at a world-class race track like Circuit of the Americas is just fantastic. I am ready to rip.” The weekend will open up with a test day on Thursday, with Race 1 set for Saturday afternoon and Race 2 on Sunday. Live streaming of the race will be available at www.world-challenge.tv. TV: CBS Sports broadcast set for Saturday, March 11th at 11am ET. Live Streaming: http://www.world-challenge.tv http://www.guycosmo.com https://twitter.com/guycosmo Audi began a new chapter in 2009 with the introduction of the Audi Sport customer racing program. For the first time it was possible for motorsport customers to acquire a race car designed for customer racing events. Since its inception, the success of the R8 LMS has been significant throughout the GT3 racing format worldwide, including victory in the GT class in the 2013 edition of the Rolex 24 at Daytona. The Audi R8 LMS shares more than 50 percent of its parts with the Audi R8 street car, including the naturally aspirated V10 5.2-liter engine, the Audi Space Frame and a variety of other components.