Product Test Lightning In A Bottle? 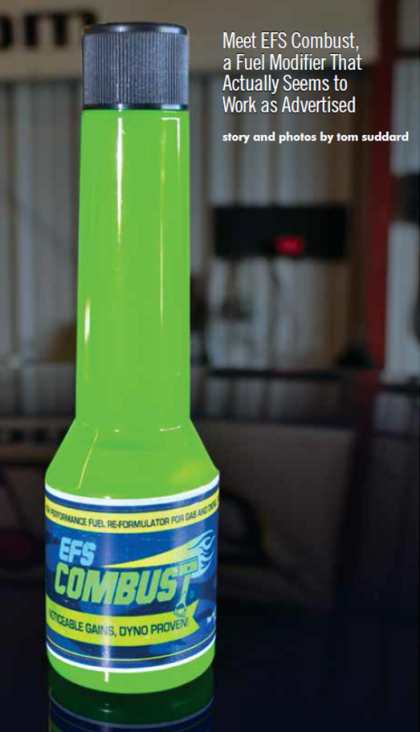 Let's cut right to the chase: Fuel additives have a bad reputation in our world. They go by all sorts of name-modifiers, enhancers, booters- but one unifying term seems to stick to the like glue: snake oil. Like those supposedly medicinal liniments peddled at the 19th-century sideshows, they don't work, they're overpriced, and they're sold by con artists.
Or are they?
A new advertiser of ours, EFS Combust, says they're different. They claim that their fuel additive isn't snake oil, just science-and that it actually works. We decided to put their claim to the test using our dynamometer.

Focus on the Additive

Face it: Strange, neon-green bottles of mystery liquid don't exactly scream "Trust your car's engine to me!"
This point was driven home when we walked through GRM headquarters asking for someone to volunteer a project car for the test.

There weren't any takers, with excuses ranging from "My car is already blown up" to "My belts squeal" to "Uh, no."
We needed to find another way to get a test mule for out test. Just renting a car would be boring, so we decided to try something new: car sharing. And no, that doesn't mean we asked a neighbor if we could borrow their minivan.

We signed up for Zipcar, a company that rents cars by the hour. Their slogan is "Wheels when you want them." Well we wanted then, and we got them. A nearly new, automatic, naturally aspirated Ford Focus would be our guniea pig for just $7.50 an hour.
As usual, Superchips generously allowed us to use their Dynojet chassis dynamometer, which measures engine power and torque. They also loaned us two of their employees-Chris and Pat-who would ensure we didn't break anything. With a bottle of EFS Combust fuel additive in hand, we were ready to get started.
Before we poured anything strange into the Focus's tank, we had to pour in something familiar. We filled the tank with standard, 87-octane fuel and then drove the car 50 miles to make sure the system was clear-after all, an industrious past Zipcar driver might have poured something strange into the tank.
With the Focus's fuel essentially "reset," we strapped the car to the dyno and did three baseline pulls. The result: 146 horsepower and 133 ft.-lbs of torque at the front wheels. (Yes, even seemingly meek cars have gotten powerful.)
Next, it was time for a shot of EFS Combust. We followed the directions on the bottle, adding a chaser of more 87-octane gas to make sure we hadn't left any additive in the fuel neck.
EFS Combust instructed us to run an entire tankful of the additive-spiked gasoline through the Focus before we did another dyno pull, claiming this step was necessary for the ECU to adapt to the cocktail. That was all well and good, but we're huge fans of the controlling variables in our tests. Driving the car 300 miles then bringing it back the next day seemed like a poor way to do that.
So we skipped that step. We never even unstrapped the car from the dyno after pouring in the additive. Instead, we ran the car from 30 mph to 80 mph and back to 30 again for about 5 minutes-no resistance.
We didn't expect this to be sufficient for the additive to take effect, but we figured we might as well test the car again before doing anything more elaborate. We did three more pulls on the dyno. The result: 151 horsepower and 138 ft.-lbs. at the front wheels.
Wow. We were surprised, especially after we realized that the car had made more power everywhere, not just at the peak. It was like the entire power and torque curves had been picked up and moved five points higher.
The dyno operators were speechless. They'd never seen a fuel additive actually work before. They begged us to leave a few bottles of EFS Combust for them to try on their own cars. Then we all sat down for a spell and attempted to figure out what variable we hadn't controlled well enough. We couldn't come up with anything.
Now, we know what you're thinking: Of course GRM is going to say EFS Combust works, because it's sold by one of their advertisers. Well, that isn't how things work here. EFS didn't get any special treatment, and we actually planned on the additive doing absolutely nothing-and we told the company that's what we were expecting this story to prove. We were surprised when the company said, "Go ahead anyway," and this results explains their confidence.

Where does this leave us? We seem to have found a fuel additive that actually does what it claims to do: increase power and torque.
But this is Grassroots Motorsports, and we're never content to provide results without explaination. We are, however, short on pages. In a future issue, we'll get to the bottom of why EFS Combust works and try it out on something a little more exotic than a Ford Focus.
Think you know the secret of EFS Combust? Feel free to discuss it on our forum, which can be found